5 CEOs who use Public Speaking to Shape their Company Culture 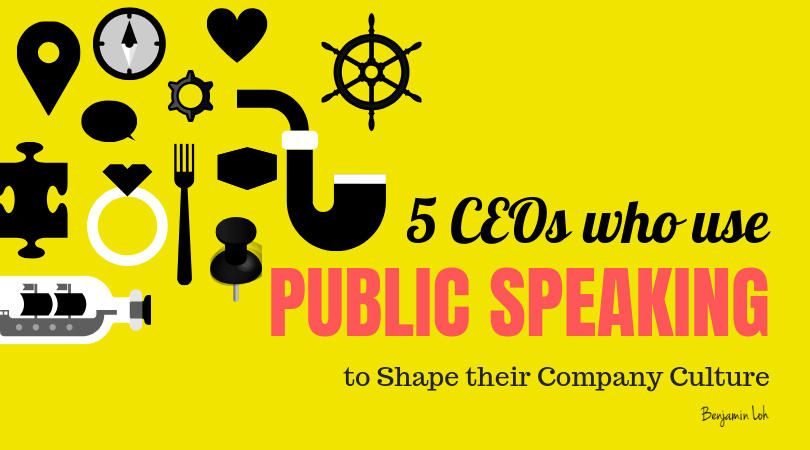 One key ingredient for business success is the ability to communicate the vision and mission of a company. Strategic thinking, industry knowledge, vision, and the ability to adapt swiftly — these are all qualities that set leaders apart.

But the modern CEO has evolved to become the face of the company, or the figurehead whom shareholders, employees, and even the public look to for cues about the organisation’s health, culture, and direction.

What separates good leaders from the great ones

This is where great public speaking and presentation skills come in. And while they may not be essential to the job of being a CEO, these skills can turn good leaders into fantastic ones. The art of rhetoric can be the secret sauce that helps leaders to motivate employees, set the tone of the organisation’s culture, and ensure that stakeholders buy into the mission.

In this guide, we look at five examples of CEOs who have used charisma and masterful speaking to shape their respective empires.

When Jack Ma talks, people listen — not because he’s the richest man in China (US$39.8 billion as of this writing), but because he’s widely considered as one of the best motivational speakers in the world of tech. While many companies are inextricably linked to their founders, few have left an imprint the way Jack Ma has on Alibaba.

What he does well: Jack Ma’s communication skills, honed by years of teaching English but more so, delivering English speeches and presentations globally, is a huge reason behind his public speaking skills. His style works for most parts because his message is easy to digest and remember. And he doesn’t try to put on any specific accents (not that it works) just to be relatable. He knows his work and life journey can be so.

His self-deprecating humour and unassuming demeanour also deviate from the image of a corporate chieftain. The man once famously wore a Mohawk and make-up before singing Elton John’s “Can You Feel the Love Tonight” to a stadium full of Alibaba employees.

But Jack Ma tempers this chutzpah with his working-class origins, which he references in interviews and speeches. And despite having stepped down as Alibaba CEO, his efforts to portray the company as an underdog continue to yield dividends today, playing an important role in attracting talent and capital to the e-commerce company.

Tony Fernandes, the man credited for launching Asia’s first low-cost carrier, is also one of the most highly sought after public speakers in the world, and for good reason. The Air Asia CEO has frequently described his leadership style as being all about bridging the gap between the chief and his crew in order to make business more productive and human.

What he does well: While Fernandes’ most notable achievement will always be turning around a company on the brink of bankruptcy, observers credit his success to strong leadership skills and the ability to create and reinforce good organisational culture.

In interviews and speeches, Fernandes is charismatic, often joking with the audience and willing to go off-script — even offering a Universiti Putra Malaysia free Air Asia tickets. He is most at ease when talking about his company’s frontliners, emphasizing the value people bring to an organization.

For some of his public speeches and addresses to the media, he is also comfortable with being simply dressed without the suit and tie. There have been times where he has been also authentic and congruent with his feelings by allowing his emotions to flow, even in front of scrutinizing members of the media.

Sony Corporation’s Kazuo “Kaz” Hirai assumed the mantle of CEO at a time when the company’s earnings were deeply in the red. Since then, his hands-on leadership style has succeeded in bringing things back to near-record levels.

Now serving as Sony’s chairman, Hirai credits this success to his unconventional upbringing, having been raised in the US and Japan. This duality has been instrumental in his willingness to buck convention and infuse passion into Sony’s products, made possible by encouraging people with unconventional ideas to speak up.

What he does well: In speeches, Hirai is one of the rare breed of CEOs who are articulate and confident on stage. He’s comfortable in front of a crowd, regardless of whether he’s talking in Japanese or English. And while it’s easy to think that his skill comes from being able to read a teleprompter, Hirai is just as adept in interviews, providing clear and concise answers instead of rambling.

In this speech above, Kaz moves comfortably with strong presence and gravitas. He would leverage humour appropriately and timely and yet, also segue into Sony’s story and journey so adeptly. It’s so obvious that he is well-rehearsed from how his speech was well synced with the slides on the screen behind him.

Being a company’s storyteller and on-stage ambassador is such an under-stated role. And… it’s never on the JD.

Steve Jobs’ tenure as Apple’s CEO is the stuff of legend. As the tech figurehead responsible for revolutionizing the technology keynote, Jobs has turned what used to be dry and boring corporate presentations into jam-packed events.

What he does well: Jobs focuses on a simple and direct message that the audience cares about, rather than get bogged down by details. His style isn’t to talk about products as products per se, but as experiences. For example, the iPhone isn’t just a phone, it’s a product he referred to as an “iPod, a phone, and an internet communicator” in one package, making the device greater than the sum of its parts.

Jobs’ keynote speeches always galvanized stakeholders thanks to his method of pointing out a villain, which, over the years, has included the likes of IBM, Windows PCs, and Google Android. The hero in this story, unsurprisingly, is Apple. And it’s this ‘us vs. them’ rhetoric that has created a cult of personality around Jobs and inspired fierce loyalty in Apple from employees and customers alike.

s one of the most prominent voices on gender equality in corporate America, Maria Eitel’s work with the Nike Foundation has earned her recognition from former US President Barack Obama. Eitel is also known for co-establishing the “The Girl Effect,” a Nike Foundation project that seeks to empower marginalised adolescents with youth brands and mobile platforms.

What she does well: Eitel’s passion for engaging and mobilising citizens in social change is infectious, to say the least. In the months leading to her initial pitch of The Girl Effect to Nike co-founder Phil Knight, Eitel spent hours looking for a project that would make the world a better place. Her research would eventually lead her to adolescents in the developing world, specifically, in countries with no Nike investments or factories.

Eitel also excels at condensing big ideas into short speeches and interviews. Rather than drone on and on about the Girl Effect and what it does for the community, she cuts to the chase, talking about why the project matters, allowing the power of the idea to make an impact instead of relying on the length of her speech.

The CEOs on this list aren’t necessarily the best or most charismatic public speakers out there, but they all communicate substance and set the tone for what their respective organisations do and believe in. This enables them to empower their stakeholders and motivate them to believe in the organisation goals and mission. And in a world where companies are under increased scrutiny from the public and where speeches and interviews can go viral, it’s ever more important for CEOs to embrace their role as the public face of their organisations.

Who are your favourite CEO public speakers? And what do you love about them?

PrevPrevious9 steps to sell to someone more influential than you
NextHow to Make Your Organization More Millennial-friendly ?Next